Fwd: Tyranny on Citizens in VA! 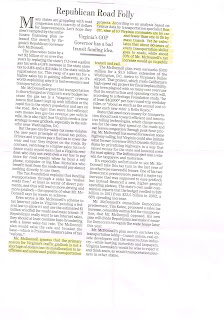 Dear All, I had to send in two emails due to limits of gmail account.
Tricia


All Legislators & VA Patriots,
HB2313 supports Taxaholism and loss of liberty in VA !   This UN Agenda 21 , Sustainable Development Tax Hike  is shameful! What is most shameful is the absolute loss of TRUST in  our elected public servants as they destroy American Principles of Liberty with this unbearable, unaffordable, unnecessary, unwanted, unconstitutional and outrageous TAX HIKE on struggling Virginia families!  Mr. Underwood's following letter speaks for many Virginians!   As he correctly points out,  if any project is worthy, the "free enterprise"  will see it from conception to implementation, without  fear of government intrusion! Government officials promote  corporate welfare, for re-election purposes, and have all but destroyed this concept via AG21 Public Private Partnerships.

VA wins the "GREATEST MISUSE of Taxpayer WEALTH" award,  out of all 50 States! Transportation dollars misappropriated to education for Bloated Bureaucracy and securing a voting block! The largest tax hike in VA history is not really about "transportation". It has everything to do with  Sustainable Development's UN AG21 control of land use, people control (not the CFR Elitist) and destruction of Capitalism.
http://www.edchoice.org/Foundation-Services/Publications/Bloated-with-Bureaucracy.aspx#.UTS5Woy_2h8.gmail

Tricia Stall
"Your children's children will live under Communism. You Americans are so gullible. No you won't accept Communism outright; but we'll keep feeding you small doses of Socialism until you will finally wake up and find that you already have Communism. We won't have to fight you, we'll so weaken your economy until you fall like ripe fruit into our hands." -–Nikita Krushchev, 1959


Senator McDougle:
HB 2313 is an absolute taking of the wealth of Virginia Citizens.  More taxation will have a negative effect on our economy.  Where does this fit in your stated goals of limited government, Free Enterprise,  and individual freedom.   Having read the bill, I can attest that it is a Christmas tree for various and sundry areas, including funding for the Dulles Rail Project, which I vehemently oppose (If there is a need for the rail project – It should be privately funded).   I have discussed the Governors bill related to finding $ for Transportation with Edgar Doleman (Past President of the 99th District Tea Party) and we are in agreement that:
1.       Transportation Funding problems did not arise as a result of insufficient revenue, it is a result of the General Assembly's inability to budget and to eliminate unnecessary programs.
2.      As noted in the attached WSJ Op Ed, only two years ago, in 2011, the General Assembly passed a 66% tax "increase that was supposed to ease gridlock but instead financed a new, higher general spending plateau."   So if Transportation is really a priority, First, look for where the added revenue (roughly $15.5 Billion) is really being spent and claw it back to fund Transportation.
3.      Use the Funds only for new road construction and maintenance.  Eliminate all funding for Mass Transportation.  If the private sector wants to have a rapid rail from Washington to Dulles, and thinks that they can do so profitably, let them.  It's just not the job of the State to cater to every special interest group.  The State should not be picking winners and losers nor encouraging technologies that will benefit only the few (as also reported in the WSJ article, McDonnell would allocate 30% of the new Tax Increase to Public Transit and rail).   The Problem is Lack of Funds for Roads, not Rail.
4.      It is the Job of the General Assembly to prioritize its allocation of Funds.  If you need more money for Transportation (not including mass transit projects that should be only undertaken by private enterprise), then it must be taken from some other part of the budget.  I really believe that another tax increase will only lead to a request for even more a year or two later.
Please be a spokesman for reason, Kill this bill in your committee.  Please note that we are watching, and will certainly note the way you vote on this unjustified tax increase.
5.      Please read the attached WSJ article. It is short and exposes the absolute folly of increasing taxes yet again.
6.      KILL THIS BILL!!!
Gene K. Underwood
President
99th District Tea Party


--
Tricia Stall
Distinction between conservation and environmentalism: The first means taking care to use natural resources without ruining them for the next person. The second says that mankind has no rights and suggests that any use of any natural resource causes damage. We must STOP AGENDA 21!