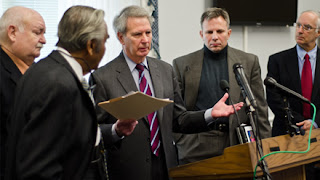 Dec. 19, 2012 (EIRNS)—This release was issued today by the Lyndon LaRouche Political Action Committee (http://larouchepac.com)
At a well-attended press conference on Capitol Hill today, Rep. Walter B. Jones (R-NC) and Rep. Charles Rangel (D-NY) presented an open letter to President Obama, urging him not to lead the nation to war, but to abide by his Constitutional obligations.
Reps. Jones and Rangel were joined by retired military official Col. Patrick Lang and Lt. Col. Anthony Schafer, who supported their point of view, as well as Jeffrey Steinberg of EIR magazine.
The full letter, which Congressman Jones read to the press, was sent on Dec. 18, and reads as follow:

Dear President Obama:
We are writing to strongly urge you not to once again lead our nation into war without authorization from Congress. Your recent threat of "consequences" should Syria use chemical weapons is eerily reminiscent of the calls for war with Iraq to deal with their "Weapons of Mass Destruction." We would like to remind you that the power to declare war remains vested in the Congress. No resolution from the United Nations or NATO can supersede the power carefully entrusted with the representatives of the American people.
If your administration believes committing Aemrican troops to Syria is essential, the case must be presented to Congress. Outside of an actual or imminent attack on America, the only precursor to war can be the authorization of Congress. We call on you to abide by our Constitution, and rely on our country's representatives to decide when war is necessary. There is no greater responsibility than to send our sons and daughters to war. That responsibility remains with the United States Congress.
Sincerely,
Walter B. Jones (R-NC)
Ron Paul (R-TX)
Mo Brooks (R-ALA)
Michael H. Michaud (D-ME)
Justin Amash (R-MI)
Charles Rangel (D-NY)

A full video of the presentations by all the participants, and their answers to questions can be found onwww.larouchepac.com.

Updated Fact Sheet: To Stop World War III, Oust President Obama for his Alliance with al-Qaeda in Libya and Syria

Bi-partisan demand to be consulted on Obama plans

Taylor Rose is a Washington, D.C., staff reporter for WND.
WASHINGTON – U.S. Reps. Walter Jones, R-N.C., and Charles Rangel, D-N.Y., along with retired senior defense intelligence officer Col. Walter P. Lang and the Veterans for Peace today said Congress must be consulted before Barack Obama would send American troops into Syria.
Or else.
At a press conference, Jones discussed his resolution to oppose American involvement in Syria without first consulting Congress.
His resolution, H.Con. Res. 107,[1] expresses “the sense of Congress that the use of offensive military force by a president without prior and clear authorization of an Act of Congress constitutes an impeachable high crime and misdemeanor under article II, section 4 of the Constitution.”
Jones was responding to the growing potential for direct American involvement in Syria to support the opposition to President Bashar al-Assad.
Just as he was one of the few Republicans opposed to the war in Iraq, Jones again expressed his opposition to a war that would be conducted without the approval of Congress.
It is Congress, after all, that the Constitution entrusts to make a decision regarding war, he said.
His resolution comes at a time when America’s military presence in the region is rising. Just this week, U.S.-supplied Patriot missiles arrived in Turkey to protect it from the Syrian conflict that is spilling across borders.
Jones made specific reference to how Obama took the U.S. to war in Libya and never consulted Congress. He said he does not want to see that policy repeated.
Rangel said the procedure should be for the president to come to Congress, which “means come to the American people.”
“That is not asking too much,” he said.
Regarding to the situation in Syria, Lang, the former deputy director for military attachés and operations, said there is “a great deal of exaggeration going on” in the media’s coverage and portrayal of the events.
“The outcome is not at all certain,” he said, putting emphasis on the fact that Assad is “not close to defeat.”
He also noted that “regime change has been the policy of this government from the start” and said the U.S. recognizes the Syrian Opposition Coalition as the legitimate government of Syria, but “there is nothing in international” law that declares the Syrian Opposition Coalition to be the legitimate government of Syria.
When asked by WND how U.S. relations with Russia, the main supporter of the Assad regime, would be affected by U.S. intervention, both Jones and Rangel admitted that they had no idea.
That’s why, they say, the U.S. should not intervene.
Lang added that by militarily intervening in Syria, the U.S. could create a “World War I-like scenario” in which the conflict rapidly expands from nation to nation in the region, until finally the world’s great powers are in armed conflict with one another.
Jeffery Steinberg of the Executive Intelligence Review added that the possibility of a U.S.-Russian clash over Syria is “very much on the minds of the Russian political and military elite.”
He added, “Syria is a slippery slope.”
Rangel said: “I am just as patriotic as the next guy … but when somebody says our national security is threatened, then it is time to call up our troops in a draft. That is how I look at it. And if you cannot find it in your heart to step forward and make some sacrifice then we should not be involved.”
Asked what should be done if Obama follows through with military intervention in Syria, Jones said charges of impeachment must be brought.
Others expressing support for Jones’ ideas were Reps. Justin Amash, R-Mich.; Mo Brooks R-Ala.; Michael Michaud, D-Maine; and Ron Paul, R-Texas.
Their letter states: “Outside of an actual or imminent attack on America, the only precursor to war can be the authorization of Congress. We call on you to abide by our Constitution, and rely on our country’s representatives to decide when war is necessary.”
Link: (inserted by the sender of this email; the WND article's link is broken)
[1] http://thomas.loc.gov/cgi-bin/bdquery/z?d112:h.con.res.00107:

December 19th, 2012 • 5:33 PM
Phil Restino, co-chair of Veterans for Peace Chapter 136 of Central Florida Veterans For Peace, has called for anti-war groups to show some real guts and support H. Con. Res. 107, introduced by Rep. Walter Jones on March 7, 2012. In an article Dec. 14, in the publication Vets Today, Restino says, "Well, it looks like Obama is going to attack Syria with at most token opposition by the national antiwar organizations, as was the case when he phoned in the order to bomb the crap out of Libya back on March 19, 2011."
Will antiwar orgs get behind HCR 107 to prevent war on Syria? [1]
He continues, "The most we'll probably get from the national left-only-need-apply antiwar organizations, to include our own Veterans For Peace, is some kind of meaningless C-Y-A statement of opposition while the Democrat War Criminal President Obama" launches another war with the "left cover" he depends on.
Restino led the fight inside the VFP "to Impeach President Obama for the illegal, unilateral invasion of Libya along with other war crimes," resulting in the passing of an impeachment resolution in August 2011 at the national VFP convention. Restino relentlessly argues against those leftists and progressives who protect Obama from the so-called "racist rightwing," using that as the lame excuse for not impeaching the war criminal president.
This new article by Restino urging a national effort to back the Walter Jones resolution, comes as more signators every day are signing the petition against a Syrian war that has already been posted on the "We the People" section of the White House website and is also being promoted on the Alex Jones "Info Wars" website.
Links:
[1] http://www.veteranstoday.com/2012/12/13/will-antiwar-orgs-get-behind-hcr-107-to-prevent-war-on-syria/
at 8:14 PM