"The Heartland Institute is about as reprehensible as you can get."

No one likes to be called "reprehensible," especially not by a member of the U.S. Senate. But when the slur comes from a politician who is waging war on affordable energy and climate science, we take it as evidence of our effectiveness. 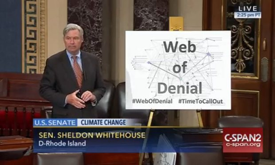 Sen. Sheldon Whitehouse (D-RI) and 18 other Democrats spent Monday and Tuesday this week attacking by name a long list of conservative and mainstream organizations – including us – whose only "sin" is challenging the Obama administration's anti-jobs and anti-science energy policies.

Along the way, these senators threatened your right to voice your own opinions, no matter how unpopular, and to support organizations you believe in.

We watched the spectacle carefully. It's clear from what the senators said that Heartland's efforts to speak truth to power, to debunk emotion-driven climate alarmism with science and reason, are working. We are winning the debate, and they know it. Here's the proof:

Our success has led the environmental Left and its puppets in Congress to change tactics. Instead of debating the merits of the science, they have decided to use the power of government to intimidate, harass, and perhaps even arrest those who disagree with state dogma on climate change. That's what this week's carefully orchestrated #WebOfDenial push was all about.

It was truly breathtaking to see our political leaders attack our free speech rights – the same leaders who swore an oath to uphold the Constitution that protects those rights.

I hope you see this is not just an attack on Heartland, but an attack on you and all Americans – who have a right to support the causes they believe in without being singled out for government harassment.

Please take a moment right now and make a contribution to The Heartland Institute so we can fight back against Sen. Whitehouse and his anti-free speech cabal.

We need your help to keep up the fight. Obama, Whitehouse, and their cat's paws in the states – Democrat attorneys general – are trying to scare away donors and supporters by demonizing us. Many business leaders and philanthropists are worried that by supporting us, they will be targeted by the IRS or even worse.

This is a great threat to everyone's First Amendment rights. If it succeeds, it would  mean we are a less free nation. And it would lead to the destruction of the world's best energy system, further reducing America's prosperity, international competitiveness, and national security.

If we lose our ability to disagree with this administration, what freedom of expression will be safe under the next administration ... regardless of who wins the presidential election?

Please help us lead the movement to put sound science and economics back into the global warming debate. Make a contribution now. Even a gift of $5, $10, or $25 will make a difference.

We thank you for your consideration, and for your own efforts to ensure that freedom is rising.